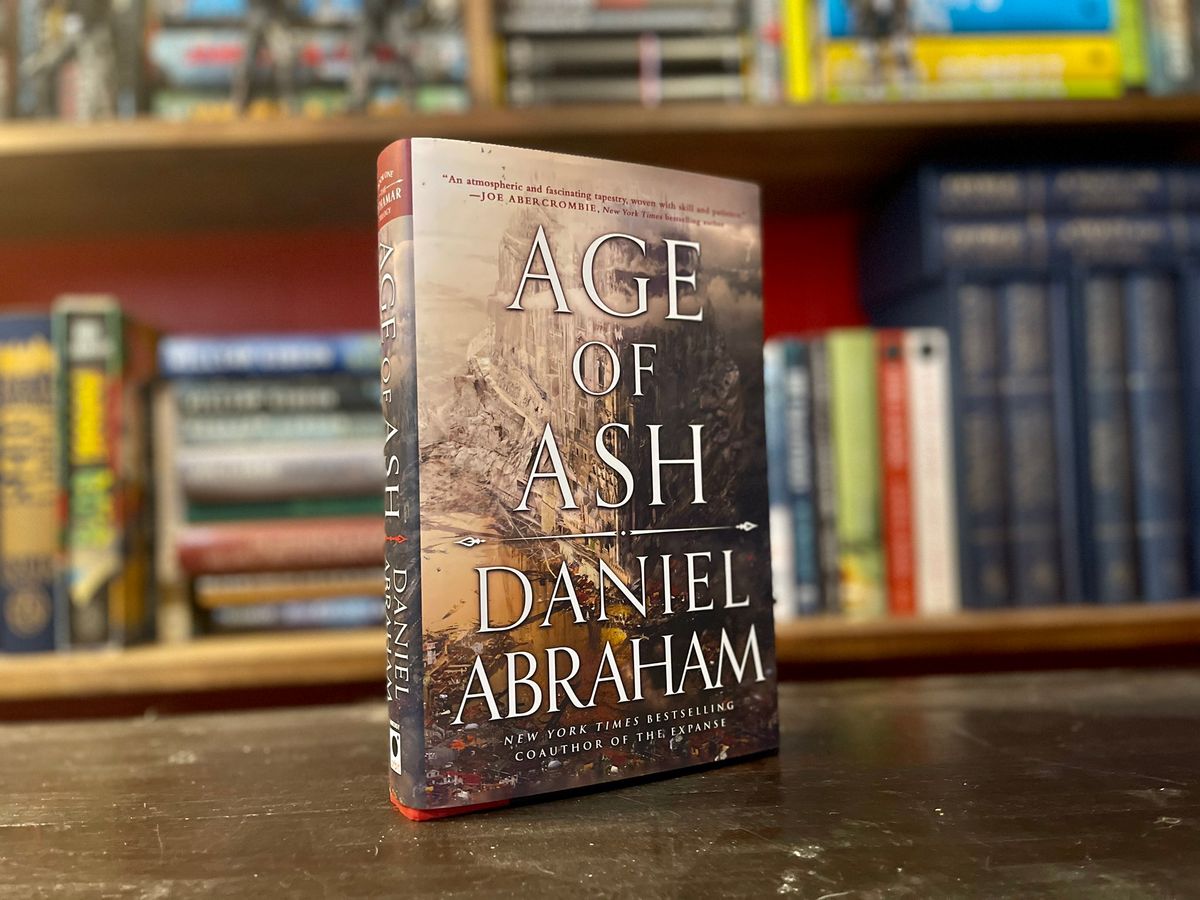 What happens when you get fixated on something, and you lose perspective on what your real goal is?

Generally, nothing good. Take your eyes off the road, let your mind wander in a high-stakes situation, or let your moral compass spin askew, and you're often liable to find yourself not only off the path, but in some sort of serious trouble that might cost you your destination or whatever purpose you've set for yourself. Apply the idea to fiction, and you inject a bit of moral ambiguity into one's narrative.

Some spoilers for the book ahead.

That idea is what's at the core of Daniel Abraham's latest epic fantasy, Age of Age. Set in the city of Kithamar, we follow the story of a young woman named Alys, a street thief who's made her way through the city's streets and crowds and steering clear of the city's police force. She's following roughly in the footsteps of her older brother Darro, who she soon learns has plenty of secrets, like a stash of gold that could have led them away from their miserable, impoverished lives, when he turns up dead.

There's a noirish feel to this book as Alys decides that she should try and find out why he was killed: was it because he'd saved her from a guard, or was something else at play? And to what lengths will she go to find out the truth behind his death?

Those questions ultimately lead her to some of the city's darker corners, and into the midst of a greater conspiracy that lies at the heart of Kithamar. As Darro was being stabbed to death, the city's newest ruler, Prince Byrn a Sal, also mysteriously died, leading to plenty of questions about the nature of his successor.

Darro and his pile of gold, as it turns out, has some connections to that killing, and Alys dutifully follows in her quest for some sort of answer, only to get snared in the same traps that her sibling found himself in. The conceit here is a neat one, a supernatural plot that's sunk into every nook and cranny that is Kithamar.

There's a tendency in fantasy fiction to equate realism for grittiness. There's some truth to that idea, that life isn't straightforward or uncomplicated, but it's a tendency that can also prove to be an addictive trap for authors and readers: grimdark fiction tends to pile on the violence against its characters, as though anarchy and rule by force are the same as life's complications. In his book The Caped Crusade, NPR's Glen Weldon examined the history of Batman, and looks at how DC comics and writers like Alan Moore and Frank Miller brought the character back to his roots as a bit of a reaction to the sanitation that had been brought to comic throughout the middle of the 20th century: fans and creators wanted to get away from what they perceived as stories designed for adolescents and children.

There's an element of that in fantasy: works by authors like Joe Abercrombie, Brian Staveley or Glen Cook feel a bit like a reaction against the types of fantasy fiction that we saw in the 1990s by the likes of Terry Brooks or Robert Jordan: cozy quest novels that brought plenty of discomfort to their protagonists, but with a degree of moral certitude that you're rooting for the good guys.

With Age of Ash, Abraham sidesteps the argument; where other authors might simply substitute "realism" for "brutality", he presents a world that's less grimdark than it is desperate enough to ignore one's morality for a short while. The streets of Kithamar are grim, to be sure, but it's not in a state of lawless anarchy or brutal oppression by the city's rulers that this might have been in the hands of a brash, up-and-coming author. The people of Kithamar are largely trying to just get through the day to ensure that they have a bed to sleep in or some food to get through the day. The characters take on less-than-desirable jobs, like hauling buckets of urine or catching rats, or stealing from the better-off.

Alys's story isn't one of a good person who's been irreparably corrupted by the actions she's had to take to survive, but more like someone slowly boiling: she takes a job which leads her to a task, which leads to orders to carry out some questionable actions. It's a story of how someone loses their moral compass as they become entwined in organized crime, starting with something minor before they get to the point where they're asked to take someone out.

What we get is a fascinating character study as Alys slowly sinks further from what she was: a generally decent person, and as she does so, Abraham contrasts her story with that of a sometimes-accomplice and infatuated Sammish, who serves as something of a moral control group, and who's appalled as Alys appears to be slipping further and further away. It's an important lesson: how people can slip and make the terrible decisions that upend their lives when they're running on their own, focused intently on that one goal and ignoring the warnings from all sides that they might be straying from what their true path should be.

It's a good lesson to take away in times when the world becomes complicated, because sometimes, it just takes one good person to keep another from straying.

A podcast, a streaming service, and a look at the making of a classic film I hope that you’ve had a good week. I’ve spent the last couple of days playing with a power washer — my house is now free of a decent layer of grime and dust.
An excellent crop of books from 2021
The wild success of Brandon Sanderson's Kickstarter holds lessons for building a resilient fan community