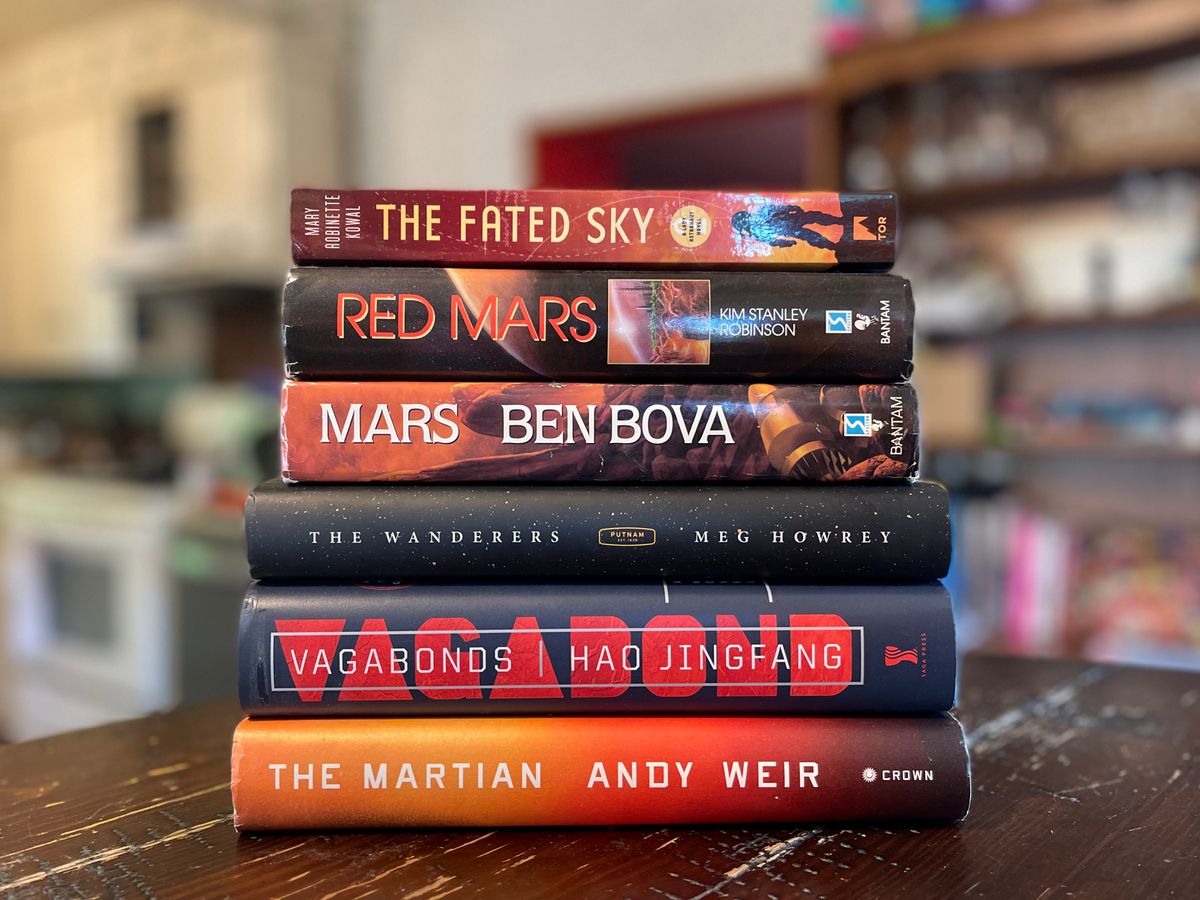 I spent the last couple of weeks binging the latest season of Apple's For All Mankind: the finale just aired on the streaming platform, and once again, I'm blown away by just how good this series is. It's an astonishing, serious take on what the future of humanity's steps out into space might look like, and it's been tackling some of the biggest, thorniest issues that we've faced when it comes to how we expand into the cosmos, and what we're taking with us, like racism, sexism, radicalization, and tribalism.

If you haven't seen it before, it's set in an alternate timeline where the Soviet Union lands on the Moon weeks ahead of the US, thus upending and prolonging the space race. Rather than grinding to a halt in 1972 with Apollo 17, the US and USSR battle for supremacy on the Moon, establishing lunar outposts before setting their sights on Mars.

Science fiction has long imagined how we might visit and explore the surface of Mars. A couple of years ago, I wrote up a piece for Clarkesworld, exploring how our stories changed as we learned more about the planet, and what surprised me from that project was how Mars reflects so much back at us: not just our aspirations and hopes for what we might get out of space exploration, but some of our flaws and the issues that we have to work out before we get there, much like For All Mankind has been doing along its entire run.

Here are six of my favorite reads about the red planet.

This was one of the first hard SF novels that I picked up while in high school, and I remember being taken by the idea of someone plotting out the various steps that we'd need to undertake when heading over to Mars, and what some of the objectives might be.

The book follows a Navajo astronaut named Jamie Waterman, who's part of a multinational expedition to explore the Red Planet, flashing between the surface mission and the events back on Earth as he and the rest of the crew trained for it. Years before Andy Weir would rise to fame for his own novel, Bova focuses in tight on the technical details of such a mission, dumping plenty of information about Mars and space hardware for readers as the mission progresses. It's a heady, optimistic look at what very well could be a blueprint for what we might eventually accomplish with such a mission.

Amidst the technical drama and day-to-day discoveries, Bova doesn't neglect his characters, or the politics that surround the mission. Jamie riles up the US's racist Vice President when his first words on the red planet aren't a prepared speech, but a few words in Navajo, while the multinational makeup of the crew leads to plenty of diplomatic wrangling and negotiation.

The Wanderers by Meg Howrey

A big component of this latest season of For All Mankind is a three-way race between NASA, the Soviet Union, and a private space company called Helios. In a bunch of ways, Helios feels like its modeled off of a modern tech company, and it makes for an interesting foil against its legacy counterparts in the race to Mars, leading to some interesting situations for all involved.

This of course, led me to think of Meg Howrey's excellent novel The Wanderers. (A bit of a disclaimer is warranted here: she and I were classmates at Launchpad a bunch of years ago.) The book imagines how a private company might prepare its astronauts for a Mars mission, and as part of that preparation, the crew embarks on a 17-month simulated mission, and endure a challenging psychological experiment that will test as to whether or not they're truly ready for the mission. It's a trippy book, and at points, you're (and the crew) begins to wonder if they're actually still on Earth.

At its core, the idea of colonizing another world is like a seed: how do you take a tiny piece of your society/civilization/world and plant it on another world? Colonization – whether you're bulldozing over the prior inhabitants or not – is about expanding one's ideology and way of life, and the nature of that expansion and the new world that people are building is a core idea in Hao Jingfang's novel Vagabonds.

In my original review of the book, I noted that it's about two worlds with very different ideologies: "Earth continued on a trajectory of hyper-capitalism based on the market for intellectual properties, while the new Martians build out a society built on collectivism and equality." It's a dense, interesting read, one that plays with the various ideas that separate out Earth and this new Martian civilization, and how people are trying to find alternatives.

In the series, this is a big thing that motivates each faction in the running to land on Mars first: NASA wants to continue the mission and ideology of the United States, the Soviet Union wants to spread communism to the Red planet, and Helios wants to plant its flag and its slightly different, capitalistic ideology there.

If there's any book that I'd recommend for fans of the series, it's Mary Robinette Kowal's Lady Astronaut series (which includes The Calculating Stars and The Relentless Moon). There's a lot of overlap: she explores a space race that's been kickstarted by crisis (in this case, an asteroid strike in the Atlantic that kicks off a global warming event, which prompts the US and partners to begin looking to space to expand humanity. The first novel is the Calculating Stars, which deals with the race to the moon and a number of characters who deal with the ingrained sexism and racism that they're forced to face.

The second installment, The Fated Sky, deals with the next phase of that mission: Mars, following the first expedition as it embarks for the Red Planet, and the various problems that the astronauts face as they fly further and further from Earth.

Here's my review of the first two novels, and another of the third. You can also read my interview with Kowal here.

It's impossible to talk about Mars without acknowledging the impact that Kim Stanley Robinson's had with his Mars trilogy: Red Mars, Green Mars, and Blue Mars, (as well as a book of short stories, The Martians) which imagines what our future on the planet might look like.

The initial novel is a dense, engrossing read that follows the wrangling and political maneuvering involved in the first initial stages of colonization, while the installments delve into the mechanics of transforming the world into a habitable one, and with the issues that face Earth, like overcrowding and ecological catastrophe.

The Martian by Andy Weir

And finally, there's probably the best-known modern novel about Mars: Andy Weir's The Martian. The book (and film) is a gripping read one that follows an astronaut named Mark Watney after he's accidentally stranded on Mars during humanity's first crewed mission to the Red Planet. At its core, it's a survival thriller about the lengths that someone would have to go to in order to survive in a place where life literally doesn't (to the best of our knowledge) exist.

That's all for today: thanks as always for reading. Let me know what your favorite book about Mars is!

A podcast, a streaming service, and a look at the making of a classic film I hope that you’ve had a good week. I’ve spent the last couple of days playing with a power washer — my house is now free of a decent layer of grime and dust.
Annalee Newitz's The Future of Another Timeline and Alix E. Harrow's The Ten Thousand Doors of January, Reviewed
23 new books to check out this month