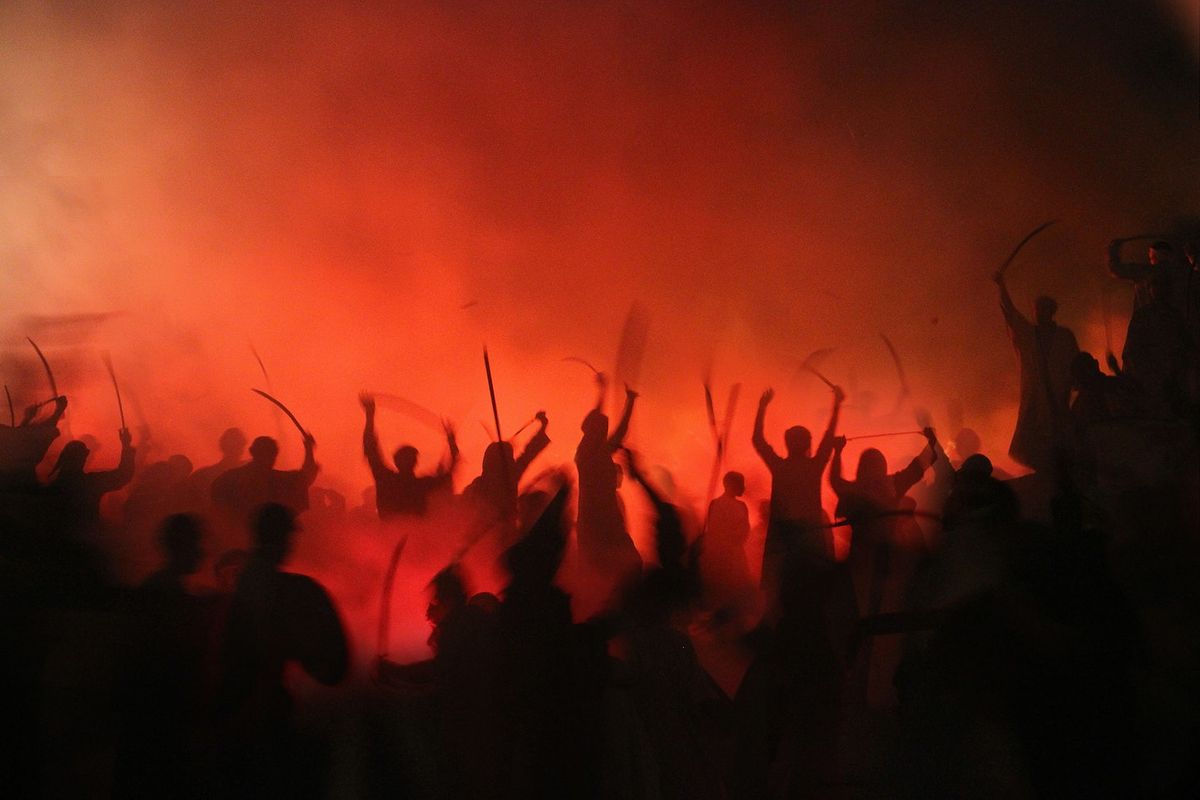 When dystopian fiction comes to life

I couldn’t help but think back to Christopher Nolan’s film The Dark Knight Rises while I watched a live stream on Twitter as a mob of Trump supporters stormed the US Capitol (what a sentence to write!). In the film Bane, the film’s revolutionary-minded antagonist, quickly takes over Gotham City by holding it and its citizens hostage with a nuclear weapon. “We take Gotham from the corrupt. The rich. The oppressors of generations who've kept you down with the myth of opportunity,” he tells a group of reporters outside of a prison “we give it to you, the people. Gotham is yours - none shall interfere. Do as you please.”

I couldn’t help but think of that character in that particular moment as I saw that mob of people forcing their way into the Capitol building, shouting that it was the people’s house, dressed in their pseudo-battle rattle. Bane would have fit nicely alongside the group, urging them on with his populist rhetoric. It’s a scene that works well, because Nolan understood how a supervillian might be able to take advantage of a society and city that’s experiencing stress and inequality, and moving to exploit those long-standing issues for his own gain.

The scene at the US Capitol last week was a horrific one — something that unfolded in unimaginable speed, even if the possibility of something like this has been rooted in the back of my mind since the November 2016 presidential election.

Science fiction is a genre that’s long been concerned about imagining what the future might hold for us, and that last four years have provided plenty of material for authors to examine: devastating wildfires in Australia and California, a continually rising average global temperature, conflicts with extremist organizations in the Middle East and the specter of conflict with near-peer adversaries like China and Russia, and in increasing global gap between rich and poor.

Those massive, intractable problems are like a sort of pressure cooker for the world’s populations, and if history continues to bear things out, the angry movements that we see rising up around the world — of which Trump and his MAGA supporters are just a part — will continue.

There’s a book that came out last year that I keep thinking about: Burn-In: A Novel of the Real Robotic Revolution by P.W. Singer and August Cole. Set within the next couple of decades, it follows an FBI Agent, Lara Keegan, as she’s paired up with an experimental tactical robot that’s designed to assist law enforcement in the field.

One of the scenes that stood out for me in Burn-In could have easily been a stand-in for last week’s events: in the novel’s introductory scene — from the very first sentence — we meet Keegan as she’s chasing down a threat on the Washington mall, where a massive group of disaffected veterans from recent wars have set up shop.

The man’s greasy red beard and braided Viking-style Mohawk had likely not been washed in a couple of weeks, but the way that he cradled his AR-15 assault rifle made it clear he took care of what most mattered to him.

That’s a scene that feels all too familiar.

As the rest of the book plays out, we watch as Keegan and her colleagues slowly become aware of a much greater plot from a technophobic extremist who’s bend on mass destruction (hacking vulnerabilities in this near-future, wired-up Washington DC), and aided by a cabal of white supremacists and politicians looking to cash in on the favor and support that a sympathetic crowd will grant them.

What makes Singer and Cole’s book so chilling is their approach to fiction: “FicInt” as Cole’s termed it, or “useful fiction” as Singer has noted. They draw in a whole range of topics from what’s going on in the real world right now, from technological advancements to social movements, blending them together into a cohesive, scary narrative that’s already coming to fruition. Science fiction in general isn’t great at predicting the future, but a book like this feels like it comes close, at least in spirit.

There are other books that are exploring similar territory. Christopher Brown’s novel Tropic of Kansas features a United States that’s disintegrated, leaving behind a fractured series of warring states rife with citizen militias.

They talked about how there were stories of underground cells from here to the Gulf of Mexico trying to fight the government. How the government blamed the Canadians for harboring “ foreign fighters”, by which they meant Americans who fled or been deported. They told Sig. how the elections were probably rigged, and the president didn’t even have a real opponent the last time. Some of the guys said they thought the attacks were faked or create public support for a crack down.

Last year, Brown told me that he’s long been fascinated by the idea of revolution, and drew some inspiration from the Arab Spring that was raging while he wrote it.

I realized that if you were gonna have a revolution in the United States, things would have to be a lot worse. Originally, it was going to be set essentially in the present and it morphed into a kind of a mirror version of the present, one in which some of the other emergent trends around me were more and more manifest, like the idea of CEO becoming an authoritarian president, autonomous weapons patrolling the skies, and the ecological exhaustion of the midwestern agricultural breadbasket of the country.

Then there’s Omar El Akkad’s American War, set in 2074, after a second Civil War fractures the country amidst an oil and climate crisis, while Octavia Butler’s Parable of the Talents imagines a US in 2032 that’s wracked with conflict and led by a far-right religious president (incidentally, who’s campaign motto is “Make America Great Again.”)

These books all depict something that seems at times inevitable: that the United States is lined with systemic fault lines that are widening under partisan pressure. Each author is paying close attention to the divisive problems that are pitting Americans against one another — often highlighting one central issue that radiates out to the rest of society: the deep-seated imbalance of power and agency between the ideologies of the left and right.

The result in all cases is that at some point, ideologies violently break, much like two formations of rock snap and cause an earthquake. In each novel, we see how a slow-burning escalation of stress builds and builds, until there’s some inciting incident: often an assassination or terrorist attack, which unleashes the floodgates into all-out partisan war between differing political factions.

This is made all the more chilling by what we’ve seen in recent days, and what we’ll likely see in the immediate future. Today’s surreal dose of reality came courtesy of the Montpelier Police Department, which announced some additional measures that they were taking to protect the state house from potentially violent threats. It’s a statement that wouldn’t be out of place in any of these books.

Science fiction in particular thrives on those intense, dramatic moments, and warfare is one particular thing that really sits well within the larger framework that the genre provides. Each of these books look the extrapolation of what might be, taking stock of the present moment, and working backwards to deconstruct the moment to best understand how we got here, and how we might move forward into the future from now.

I think if there’s anything that these books tell us, it’s that we’re governed by some deep-seated trends and movements that have been slowly boiling for a while, and that while it’s not impossible to extract ourselves from those trends, it’s something that takes time and effort to not only understand how we got here, but to deescalate, making the changes that will lessen the danger that we all face.

Hopefully, for all of our sakes, it’s not too late for us, before the danger springs off the page and into the real world.

Earlier this month, I finished Kim Stanley Robinson’s latest, Ministry for the Future, an intriguing read about our climate future. He lays out a depressing scenario, but it’s an optimistic read — he lays out the steps that humanity as a whole will need to help confront the crisis. I’ll have more to say on it later.

I also completed Erica L. Satifka’s novella Busted Synapses, which I wasn’t a huge fan of. As I noted on Twitter, it only felt like it was superficially touching some big topics, and it never really paid off. Oh well.

I also picked up a couple of neat-looking nonfiction / natureish books that I’ve been looking forward to reading: Assembling the Dinosaur: Fossil Hunters, Tycoons and the Making of a Spectacle by Lukas Rieppel, and The Falcon Thief: A True Tale of Adventure, Treachery and the Hunt for the Perfect Bird by Joshua Hammer.

Simon Stålenhag’s The Labyrinth literally just hit my doorstep, and I’ll be reading that right away.

As I did last year, I’ll be tracking my reading on Twitter in a longish thread (basically, a micro-review when I finish a title). Feel free to follow along here.

I’m thinking of this week’s post as part of a loose series examining the state of the country. This week’s post about Orwell was the first, and next up, I’ve got an in-depth look at The Turner Diaries, a racist, right-wing science fiction novel that’s fueled terror attacks like the Oklahoma City Bombing, and how science fiction is a useful tool for the White Power movement.

The crisis isn’t the only thing on my mind: now that I’ve completed Kim Stanley Robinson’s Ministry for the Future, I’ve been thinking about climate change quite a bit, and have some thoughts coming up — expect that as well.

Those posts take a bit of time and energy to research, interview, and write, so they’ll be released to paid subscribers. Because it’s the beginning of the year, and I’ve got plenty of in-depth posts in the works, I’m going to do up a bit of a discount through the rest of January for anyone who wants to jump on the subscriber list:

As always, let me know how you’re doing and what you’re reading — I’m always happy to keep the discussion going in the comments!

A podcast, a streaming service, and a look at the making of a classic film I hope that you’ve had a good week. I’ve spent the last couple of days playing with a power washer — my house is now free of a decent layer of grime and dust.
Some thoughts on fandom, books to read, and more.
Annalee Newitz's The Future of Another Timeline and Alix E. Harrow's The Ten Thousand Doors of January, Reviewed