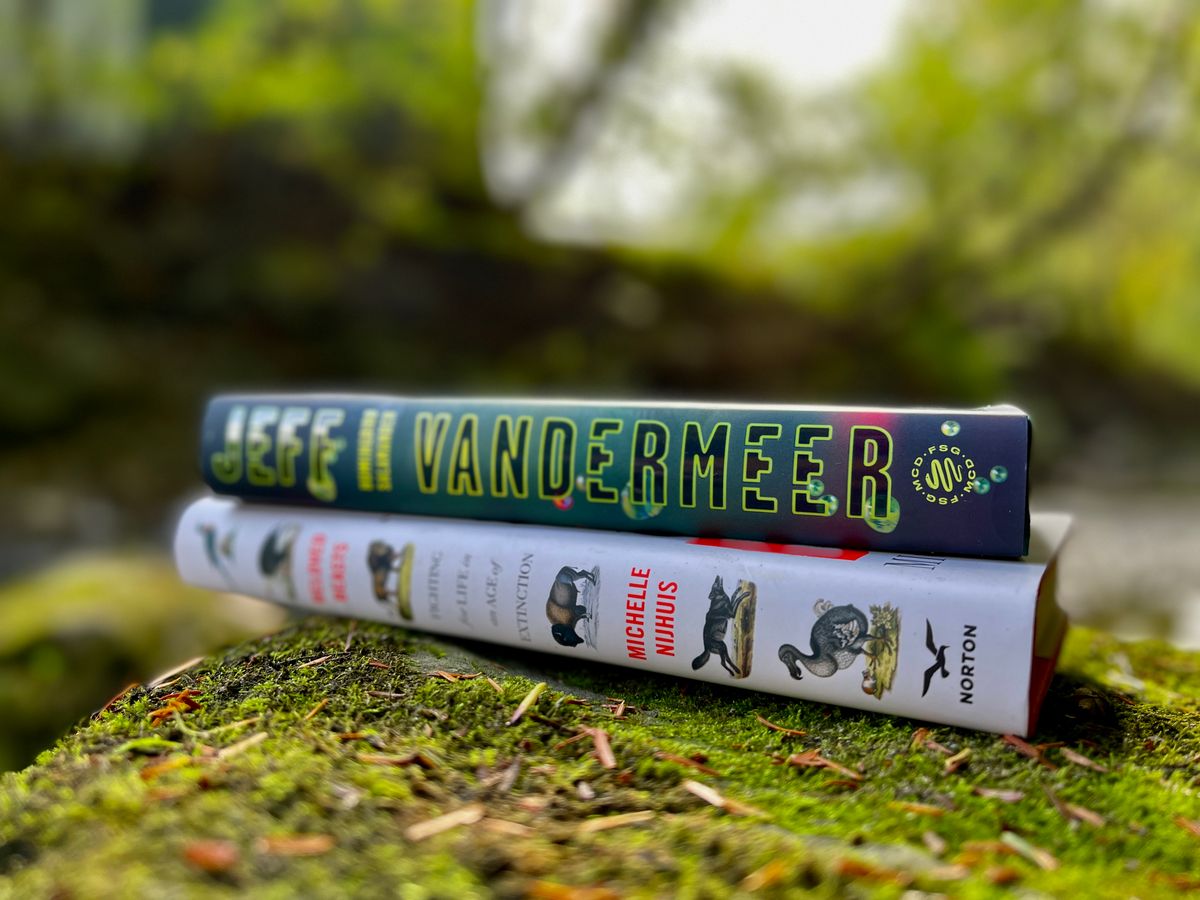 Over the course of the COVID-19 pandemic, my wife and I started walking. Megan's routine is to use her lunch break to go to the university's gym, and while we were both working from home, I started joining her. First on her trips up and down the local bike path, and then as we started to take trips further afield, to new trails and hiking spots that we'd never ventured into.

It was a good experience, one that I wish I could say that I've kept up this year. The forest became a refuge of green, and I've been trying to remind myself to get out for a walk, even if it's a quick one into the woods behind my house.

As we explored, I found myself interested in our relationship with the natural world. We spent time with other activities: I signed up as a member of the Audubon Society, wrote to my various elected representatives, sought out nature-related games, and spent more time focusing on the efforts to preserve the environment.

Earlier this summer, I picked up two books that look address that: one that looks at the evolution of our relationship with it, and another that casts a grim view of our future.

I grew up with an appreciation of nature: growing up in rural Vermont, I spent countless hours in the woods behind my family's house, building trails and exploring the wooded hillside for new trees and animals. The Boy Scouts introduced me to camping and instilled some of those basic values like "Take only photographs." I've always taken the notion of "environmentalism" as accepted doctrine for how we live: that we've always placed some value on the natural world, even as we ignore it in the name of capitalism.

As it turns out, that hasn't always been the case, which Michelle Nijhuis nicely lays out in her fantastic book Beloved Beasts: Fighting for Life in the Age of Extinction. Reality, as it always is, more complicated and tedious than one expects, and she traces the changing relationship between humanity and the environment over the last couple of centuries, focusing on a handful of notable individuals and their efforts to try and protect certain species.

We're existing in a time of introspection, particularly when it comes to reexamining the myths that we construct around people or movements: statues come down, awards are renamed, and organizations begin to explore the things that have been previously hard to look at. That's not a bad thing: the further we get from an event in history, the simpler that story becomes, and that image we have—of some fundamental historical turns in this country—becomes fuzzier. Nijhuis's look back on the history helps cut through some of that mythologizing, and showcases not only the advances in the environmental field that brought us to today, but the complications that came with them.

What I found most fascinating here is how for much of their respective histories, many of these organizations put wildlife preservation as a central mission—but only as it applied to how humans interacted with the environment. Plenty of organizations and scientists became alarmed at our impact on the natural world; one example is the feather trade between the 1700s and 1900s. Europeans and Americans became obsessed with the brilliant plumage, incorporating feathers into more elaborate headwear: "Three-foot-high confections forced women to kneel in carriages and duck into theater boxes, leading one observer to dryly predict a 'revolution in architecture.'"

It wasn't something limited to the wealthy, either: Nijhuis notes that mail-order firms made owning a feathered accessory easy for everyone, and it began going beyond feathers: "by the 1880s, women were decorating their hats with not only individual feathers but the stuffed remains of entire birds, complete with beaks, feet, and glass eyes—sometimes accompanied by arrangements of foliate, butterflies, and taxidermied rodents."

That marketplace has had a devastating effect, leading to the deaths of millions of species of birds, and the extinction of hundreds of species over the centuries. There's great moments in this history: people who found themselves moved by the stories and reports from journalists who covered this ecological destruction, and who took stands and formed organizations to raise awareness and preserve wildlife.

There are contradictions and nuances here. Bison vanishing from the western US was a concern because it striped out a natural resource, rather than having a devastating impact on the actual ecosystem from which they were part. There's a western-centric element here as well: activists approached the efforts to preserve African wildlife not as a way to preserve ecosystems or the people who lived alongside them, but to preserve their image of what Africa should look like, regardless of how that imaged lined up with reality.

Those complications make for frustrating history: looking back at all of those moments when we could have collectively zigged rather than zagged, or if we'd paid more attention to scientists and activists, we could have done so much more to preserve the natural world a little more.

If Nijhuis painted a complicated picture of how the modern environmental movement came about, Jeff VanderMeer painted a bleak one with his latest novel, Hummingbird Salamander.

Those coming to the book with an expectation of some weirdness like we saw in his Area X trilogy or Bourne and Dead Astronauts. Rather, it's a thriller that's set on the cusp of the moment as a security analyst comes into possession of a taxidermied hummingbird. Someone named Silvina delivers a mysterious note to Jane, telling her that by the time she gets it, she'll likely be dead. It contains directions to a storage locker that contains a hummingbird, and a clue that there's another creature out there.

Jane quickly becomes obsessed with tracking down the salamander and the details of who Silvina was, ultimately coming across some terrifying wildlife traffickers, and a South American business magnate who has a troubling track record of ecological devastation.

With obsession comes paranoia, and it's justified as Jane pops up on some of these guys' radar. She throws away everything: her life, her job, family, and sanity as she tries to uncover these last couple of secrets, with a tantalizing clue that there might be a solution to some of the world's problems at the end of the tunnel.

VanderMeer's Annihilation and other books are entirely preoccupied with the impact of humanity on the state of the Earth, and where Nijhuis showed us where we've come from, he points to a possible—entirely plausible—direction for where we might be headed. VanderMeer's future is one of ecological catastrophe: we've already plunged off the cliff, and civilization appears to be on the first steps towards collapse.

In many ways, Jane's journey towards finding the elusive salamander is a bit of a misdirection, and a way for VanderMeer to showcase the world we're in right now, with widespread indifference on all levels of society towards the precarious position we're in, and how we'll continue to look away while everything burns down around us. It isn't entirely moralistic lecture—VanderMeer plots this out deftly with a fascinating journey for Jane as she unravels the onion layers of mysteries that somehow connect her to her quarry.

Climate change is a massive, overwhelming threat to our existence, and Jane, searching for one last relic of the before times, feels as though she's the epitome of anyone living in 2021. Where Nijhuis's book explored the people who have taken a stand (while exploring and deconstructing their motives), Hummingbird Salamander showcases the lengths that people might go to, from ecoterrorism to even more drastic action, all to save the world. Taken together, they form an interesting pairing, each one complementing the other in some thoughtful ways.