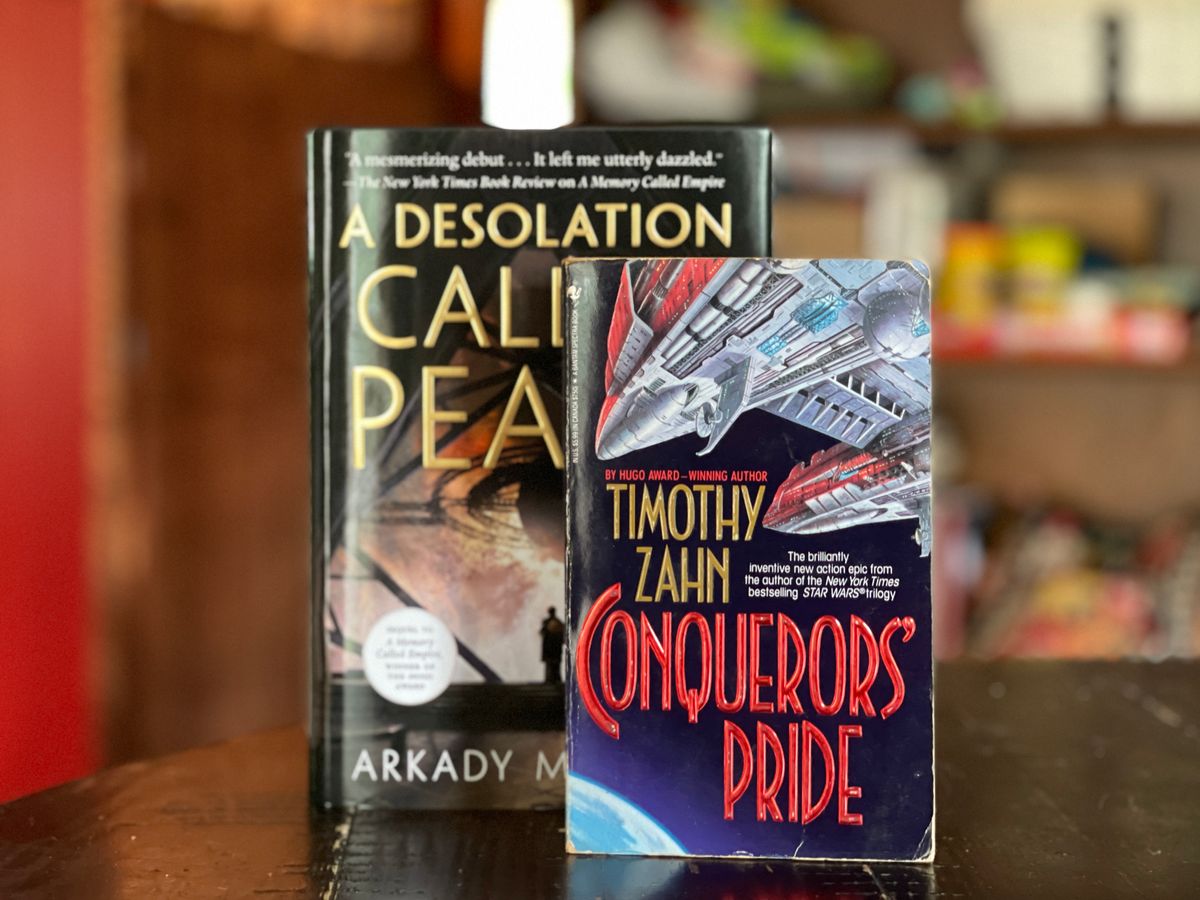 Can you hear me now?

The idea of humanity meeting our interstellar counterparts is a longstanding trope that appears throughout the history of science fiction. Some of the genre's earliest stories involved humans going off to visit the inhabitants of places like the Moon or Mars or Venus, and according to the Historical Dictionary of Science Fiction, the first usage of the term "First Contact" came in 1935, when Murray Leinster wrote 'Proxima Centauri' for Astounding Stories.

Leinster tfollowed up that story a decade later with another, 'First Contact', in which a human spaceship unexpectedly encounters an alien ship in the Crab Nebula, and work out how to try and talk to them. The crews of both ships quickly realize that while there's a language barrier, there's something else at play: they can't really, fully trust one another. Because of that, neither can afford to break off and return to their respective homeworlds without the possibility of leading their potential aggressors home with them.

It's a fun story, and when I re-read it in my copy of Robert Silverberg's excellent anthology The Science Fiction Hall of Fame, it holds up as this neat little logic puzzle that captures the heart of a good first contact story: two very different civilizations coming into contact with one another.

I recently read and finished Arkady Martine's A Desolation Called Peace, a sequel to her excellent A Memory Called Empire, as well as another old favorite, Timothy Zahn's Conqueror's trilogy (Conqueror's Pride, Conqueror's Heritage, and Conqueror's Legacy), both of which not only feature first contact situations, but which understand that the central problem of first contact isn't just a language barrier; it's recognizing and overcoming both sides' respective, inherent differences.

[There'll be some spoilers for both Martine and Zahn's books, so if you haven't read them and want to go in unscathed, you might want to stop here and return when you've read them.]

The first installment of Zahn's trilogy, Conqueror's Pride, starts off with a bang: a Commonwealth task force picked up some weird emissions in the depths of space, and set off to investigate. They end up face to face with a fleet of hexagonal alien ships and per their protocols, transmit a first contact package so that they can say hello.

Things go poorly after that: the aliens fire on the task force and take it down to pieces, with only a single human survivor, Commander Pheylan Cavanagh (who was quickly captured and interrogated.) The rest of the book deals with a human attempt to recover him, led by a squadron of hotshot pilots as the two civilizations go to war.

For the second book, Zahn flipped the script, and provides the next part of the story from the aliens' — the Zhirrzh — point of view. We get a good glimpse into their lives and culture, and discover an interesting tradition: their dead are preserved in a sort of ghost form (thanks to a particular organ), which allows them to communicate across their worlds in space. That network is the root cause of the problems between humanity and the Zhirrzh — radio waves are destructive, and as soon as the human task force sent off its first contact package, it was as though they unleashed a existentially-devastating weapon, leading to the war.

Zahn's book is clever here: it takes a fundamental tool that we take for granted, and complicates things, forcing both sides to make this misunderstanding of the other's intentions, and act accordingly, on incomplete information. The results are disastrous for both sides.

Those fundamental differences between the two civilizations and the importance of communications are are the center of all three books, and how easy it is to make missteps and turn ourselves down the wrong path. First contact stores are rife with these sorts of misunderstandings: another good example is the contact and resulting war between the Minbari and Earth in Babylon 5, which came down to a misunderstanding between the two cultures. Those misunderstandings are easy to see in the world today: just look at how ill-prepared the US was prior to going to war in Iraq and Afghanistan, and the real long-term harm that unpreparedness brought with it. It's not hard to imagine how difficult waging a war would be against an enemy that shares no common points.

Martine's A Memory Called Empire is a sublime space opera novel, one that starts as the independent Lsel Station at the edge of the Teixcalaanli Empire dispatches a new ambassador, Mahit Dzmare, to the capitol after her predecessor is mysteriously killed. In that book, Martine explores the nature of empires, and how they're built on memories and traditions that stretch out through time and space.

With A Desolation Called Peace, Martine takes an interesting turn: she's still ruminating on the role that memory and succession plays in holding up a civilization, but she puts language front and center in this new installment. At the end of A Memory Called Empire, we learn that there's a new threat to the Empire: a mysterious alien civilization that's lurking at the edge of space, and they're going to have to deal with that threat soon.

Where A Memory Called Empire used an Imago (a device that helps Lsel station preserve its memories and skills by passing imprints of personalities down from person to person) as a central plot point (the Emperor was promised one), A Desolation Called Peace starts after a Teixcalaanli task force encounters the mysterious aliens. They find that they are a formidable threat: their transmissions make everyone sick to their stomachs, their ships use strange weapons that seem to eat away the Teixcalaanli starfighters, and they've begun destroying entire worlds.

Three Seagrass recruits Mahit because she feels that because she's from a culture that's outside of the Teixcalaanli empire, her way of thinking will be of use to the overall effort, and they set off to join the task force at the tip of the spear. Meanwhile, back at the capitol, we follow the clone of the former emperor, an 11-year-old named Eight Antidote, who has plenty of questions about the nature of the Empire that he will eventually to inherit, especially as those in charge of the Empire have to weigh some big decisions regarding the aliens coming up.

Martine plays out the various conflicting agendas between fleet personnel expertly: Weight for the Wheel commander Nine Hibiscus not only has to contend with defending the Empire from the encroaching aliens, but also divisions within her own government and fleet. After a couple of costly engagements, Three Seagrass, Mahit, and Nine Hibiscus meet the aliens on a desert planet, and have the opportunity to start talking to them — basically to tell them, "please stop killing us, or we'll retaliate."

This is where things get interesting, because Martine presents us with some real alien aliens. It's clear from the onset that neither party is seeing eye to eye about the true nature of their opponent: the aliens have these weird fungal growths in their brains, and the aliens don't really understand how the humans are true people. The aliens are a hive-mind, something that skews their view of what constitutes people and civilization, while the humans have a hard time understanding what they're seeing, even as they have their own examples of shared memory, in the form of the Imago implants and some neat tech that the Shard (starfighters) pilots have equipped. It isn't until Nine Hibiscus's adjutant Twenty Cicada agrees to take the plunge to assimilate before they really, truly understand what's at stake, and that both sides can fully recognize the other for what they are. Even then, it's almost too late, as the momentum on each side has carried both civilizations closer to the brink of war.

All of that makes for some intriguing reading, and it sets A Desolation Called Peace up as an exemplary followup story to its predecessor, as Martine explores the role of empathy, understanding, and relationships in this world. Set against this backdrop is not just the first contact scenario between the Teixcalaanli and alien civilizations: it's about the language of relationships and understanding how those words have weight.

Martine builds on the romantic sparks between Three Seagrass and Mahit here, and it plays out as a neat representation of two people who are having trouble understanding and connecting with one another, because they don't share the same language and culture — Mahit is continually frustrated by Three Seagrass's seemingly dismissive nature of her existence, while Three Seagrass barely recognizes the problem in the first place.

As we go further down this rabbithole, it's clear that Martine is continuing to explore the nature of how Empires operate and use their power. The science fiction we read comes out of a very particular tradition: one in which its creators hardly recognized the role that their colonial predecessors played in the larger history of the North Americas.

Accordingly, we often see stories of Empires that set out to colonize distant worlds, but not comprehending the genocidal ramifications that that carried with it. Sometimes, that's sidestepped by us inhabiting abandoned worlds or setting up space stations. In others, we figure out how to live alongside our interstellar counterparts.

That's certainly not a universal characterization — a couple of good recent examples that comes to mind are Karen Traviss's short story "Suitable For the Orient", which draws on Great Britain's colonial past as material as a washed up doctor is dispatched to a distant colony world, where humanity has butted up uncomfortably with the local lifeforms, and Suzanne Palmer's "The Painter of Trees," about a the colonization of a world with some disastrous ecological consequences.

But Martine's books understand that empires aren't just about geographical details plotted out on a map, where one side controls x amount of territory, and the other controls y-space. It's about how cultures collide and mix and subsume one another, and often, how those violent contact points are a direct result of those inabilities to understand the folks who look and sound different — human or otherwise.

What sets Martine and Zahn's books apart here is that understanding of how badly things can go, and how at the root of these violent disagreements are not only the inability to not understand one another, but a sort of vested interest in following the punch through: once the fighting starts, both sides are driven to continue until their opponent gives up. That's to be expected: it's a basic tenet of warfare. But fighting a war without fully understanding one's opponents is a dangerous path to take, and what both novels reinforce is that everyone involved can avoid needless pain, suffering, and loss if they take the time to sit down and listen.

Thanks for reading — I really enjoyed this book, and I'd recommend checking it out.

Tomorrow, I'm going to republish a piece that I wrote last year about the billionaires of the space race (given current events, it seems relevant), and maybe another piece for subscribers exploring some similar territory from a favorite film of mine. If I can carve out the time — I'm stuck at home with two kids and some deadlines.