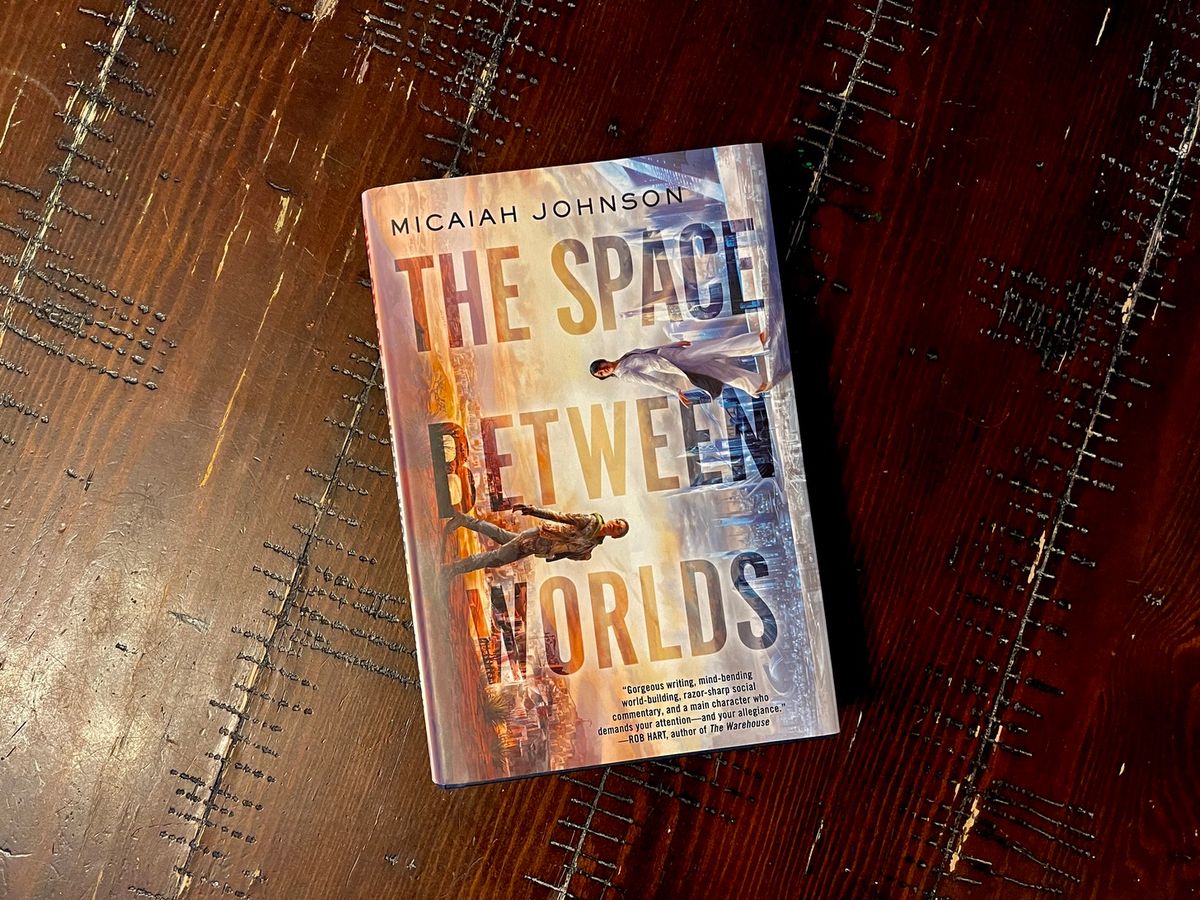 The idea that there might be other worlds out there is a pretty compelling one for science fiction readers and writers. What would happen if the sequence of events in your life was slightly different? Minute variations in that domino effect of events leads to radically different possibilities for your alternate selves.

Those differences are at the heart of Micaiah Johnson’s debut novel, The Space Between Worlds, and she weaves together an extraordinary story about the possibilities that unlocking travel between those worlds could mean for people.

The novel is set in a world — Earth 179 — where a genius named Adam Bosch figured out the secret to traveling between worlds. His company, the Eldridge Institute, sends out travelers to the ones that they can reach (380 of them) to gather data to study them: understanding the differences between different worlds, figure out what conditions make for meaningful changes, and whatnot.

The people that Bosch sends out to study are special, for a key reason: in order to travel to another world and survive, you can’t exist in it. People who have tried end up mangled and dead. Cara is a special traveler in particular, because she’s dead in 373 of them, meaning that she’s someone who can travel far and wide without too many problems.

Cara isn’t a scientist or someone with a specialized degree in this type of work: she’s from Ashtown, a slum out in the desert where life is extremely difficult, and which means that in other worlds, she’s a person who’s been profoundly unlucky in life: dying in all manner of ways.

“They needed trash people. Poor black and brown people. People somehow on the ‘wrong side’ of the wall, even though they were the ones who built it. People bought for labor, or come for refuge, or who were here before the first neoliberal surveyed this land and thought to build a paradise. People who’d already thought this was a paradise. They needed my people. They needed me.”

It’s this background that drives the emotional core of the novel: Cara’s a disposable person: literally. Johnson layers in several neat twists in this book that lean nicely into the rules of this particular universe. Cara, as it turns out, isn’t from Earth 179, but a different one, coming across the body of her doppelgänger and because she had a hard life in her own world, takes advantage of this game changing moment and jumps ship to another world.

With that territory comes a complicated tale of identity: Cara’s entire existence is a traumatic one, given her entry into the new world, her efforts to fit in with her co-workers and family, along with the knowledge that in most worlds, she’s died in horrific ways because of the systematic ways of the worlds that she inhabits.

Most of the worlds that the Eldridge Institute can visit are fairly similar, although some have strange diseases and climates, but there’s some consistent lines that they share: there’s systematic inequality between the dwellers of Ashtown and the affluent folks who live in Wiley City, where the Bosch and his Institute are located. The worlds that Cara has to navigate aren’t just the alternate realities that she’s sent to: it’s also navigating those two different worlds of secure, ultra-wealthy and poverty. In many ways, she’s an outsider in all of them, not only having to adjust to her new world, but maintain her place in Wiley City long enough to become a citizen and escape from that harsh world.

Throughout the book, this is something that Cara struggles with: she’s in survival mode, having to deal with all of the issues that come with trying to fly under the radar, assimilate, and get through the next day. As she notes at one point, her mother says that she was born reaching.

Ultimately, Cara’s story is one of survival, made all the more difficult by not only the challenges of crossing, but of the corporate malfeasance that she witnesses when the Institute unveils a new initiative.

The other facet of this novel is a parable about power and how people in high-up positions use and misuse their stature to further their own ends.

The various worlds that Cara and the others from Earth 179 visit have some commonalities, aside from her being dead in most of them. There’s the inequality between those in Wiley City / Ashtown and its variants, but also similar players: warlords like the brutal (in most worlds) Nik Nik and his Runners who maintain control over Ashtown. Going from world to world, Cara sees variations in this power structure: Nik Nik rules in most, but there are exceptions, like when his brother comes to power or his father remaining in power.

Then there’s Bosch, the brilliant founder of the Institute, who has an interesting backstory that’s eventually teased out to help with the book’s cinematic climax. Johnson makes an interesting point here: for all of the polish of a big tech firm like the Institute, leaders like Bosch — and for that matter, like Twitter’s Jack Dorsey and Facebook’s Mark Zuckerburg — they’re structures of power in and of themselves, with those leaders wielding enormous influence. Johnson puts Bosch alongside wasteland leaders like Nik Nik, and comes away with an assessment that they’re not too dissimilar: one just has different resources to draw upon.

The same can be said here in our reality: what actually separates people like our politicians or CEOs? Not much: there’s a drive for influence, a love of power and control. The only real differences might be in how the systems that surround us grant them power. As Cara finds out, people with power will go to enormous and terrible lengths to make sure that their power isn’t challenged: Nik Nik brutalizes her in various realities, while Bosch goes to even greater lengths. But at the core, the motivations are pretty much the same: people in power don’t want to give it up, no matter how many people they destroy.

Taken together, Johnson paints a picture about the lengths that those in power will go, and how that trickles down to other people. The residents of Wiley City like their affluent surroundings and don’t mix with the people of Ashtown, even though they’re the ones responsible for those surroundings. Bosch’s company exploits others across the worlds that they have access to, causing a cascade of other problems that lead to further inequality.

At its core, the novel is a parable about the dangers of what power holds for the people who uphold it, and how it often takes the actions of singular, dedicated people to being the process to undermine it and correct the system before everyone is destroyed.