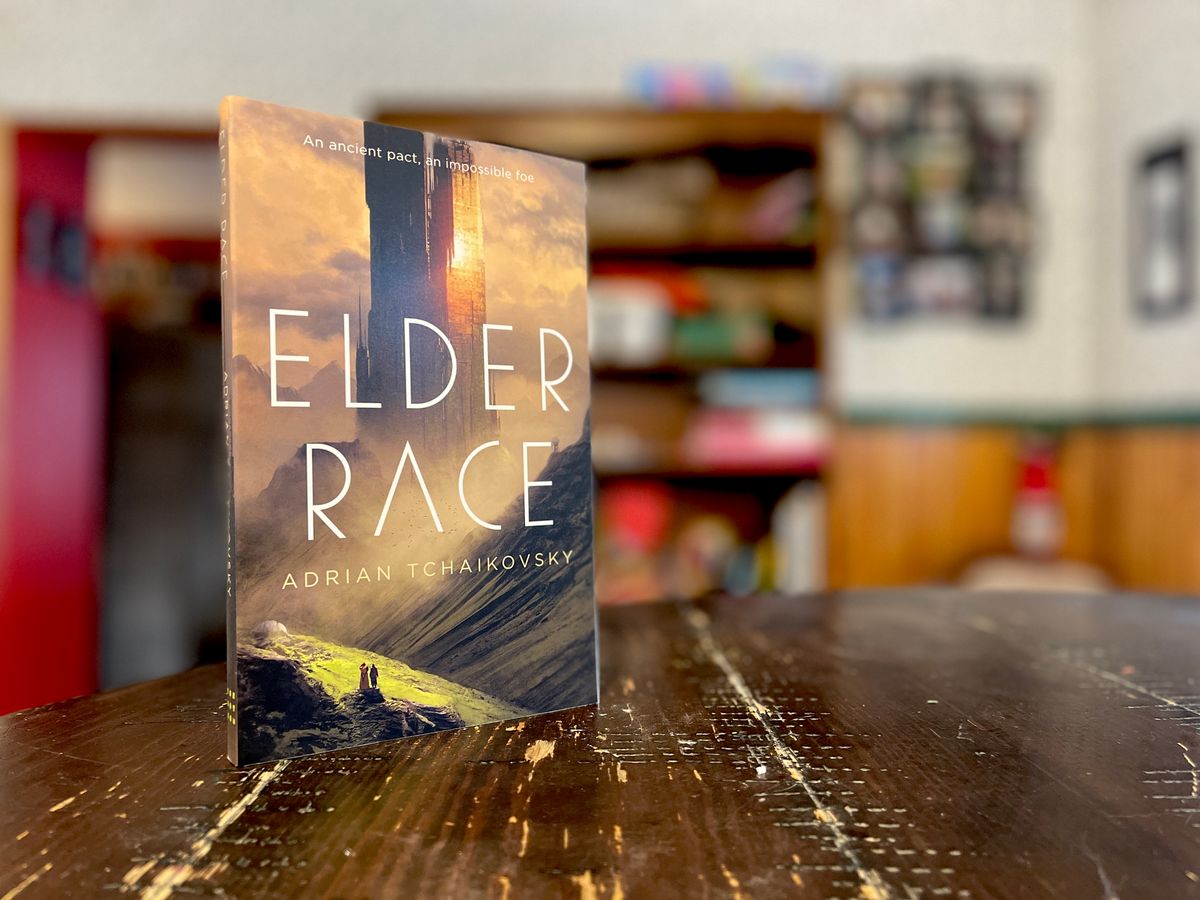 Two sides of the same coin

For a couple of years now, I've been pondering a story idea: a technologically-superior civilization contending with the prospects of a technology transfer to a people who have not advanced all that far. After reading Adrian Tchaikovsky's latest short novel, Elder Race, I don't think I need to write that story: he covers all of those ideas neatly in this intriguing read.

Tchaikovsky is a wonderfully prolific author, and he's written one of my recent favorite novels, Children of Time, in which he explores the uplift of a doomed human colony, and the efforts of a destroyed Earth to reach it, only to discover that the planet has been taken over by intelligent spiders.

This novel feels like it could take place in that same world: Tchaikovsky alludes to an Earth that colonized space, and which might have encountered some sort of disaster, leaving some of those human colonies to wither away and regress, technologically.

That seems to have happened here on Sophos 4, where Nyr Illim Tevitch, a lone anthropologist from the Earth Explorer Corps, has been left behind to study the progression of the inhabitants who've been left on their own for hundreds of years. His task is to observe and not interfere — rules akin to that of the Federation's Prime Directive are at play here — but he is known by the people of the planet, and at one point, helped them with a problem caused by some rampant technology, and went down in legend as a sorcerer.

That's how Lynesse Fourth Daughter knows of him: Nyrgoth Elder, a powerful wizard who can wield magical spells. A demon has appeared in the frontier near her kingdom, representing a growing problem for her people, and she takes it upon herself to visit the wizard in his tower. Her arrival awakens Nyr from hibernation, and she appeals to him and a promise he made to her ancestor to help her. He reluctantly agrees, knowing that he's bending the rules.

As he accompanies her, Nyr muses on his role in the Earth Explorer Corps, and the seemingly hopeless task of reporting on the evolution of the people he oversees, even as he hears no word from home. And it seems that Lyn's people are facing a formidable problem: some sort of technological mutation that's been absorbing everything in its path, and which will continue if not stopped.

Science fiction is no stranger to this question: Gene Roddenberry's Star Trek widely introduced the concept of the Prime Directive, in that the Federation can't interfere with less-advanced civilizations, and Stargate SG-1 frequently toes that line when the various away teams of Stargate Command encounter versions of ancient civilizations on different planets. It's a fascinating philosophical concept, one that looks at concerns about altering a civilization's "natural" evolution, and grappling with the blatantly racist concept that some civilizations simply aren't ready for advanced technology.

There are echoes of Arthur C. Clarke's famous three laws at play here: "Any sufficiently advanced technology is indistinguishable from magic." Tchaikovsky takes that idea and runs with it, presenting the story from two different points of view: Lyn's story is couched in fantasy, while Nyr's is that of a rational scientist. Tchaikovsky plays some neat literary tricks here: Lyn speaks one way, while Nyr is frustrated trying to translate his scientific concepts into something that's recognizable — her people simply don't have the vocabulary to understand his world. The resulting book is written as two types of stories, with one particularly neat chapter split between their two viewpoints, side by side, showing how one's mysticism is another's rationality. It's a good example of some of the inherent limits that genre places on creators.

It's a really neat thing to read, and in doing so, Tchaikovsky lays out an intriguing world in broad brushstrokes with a depth to match some of the other big worlds that he's put together. I feel like this is a story that's been trapped in too short a package, and I wouldn't be surprised if Tchaikovsky ends up returning to this place at some point in the future.

Annalee Newitz's The Future of Another Timeline and Alix E. Harrow's The Ten Thousand Doors of January, Reviewed
Exploring the Zeta Halo ring
Denis Villeneuve's adaptation of Dune succeeds because it understands the grounded nature of Frank Herbert's novel