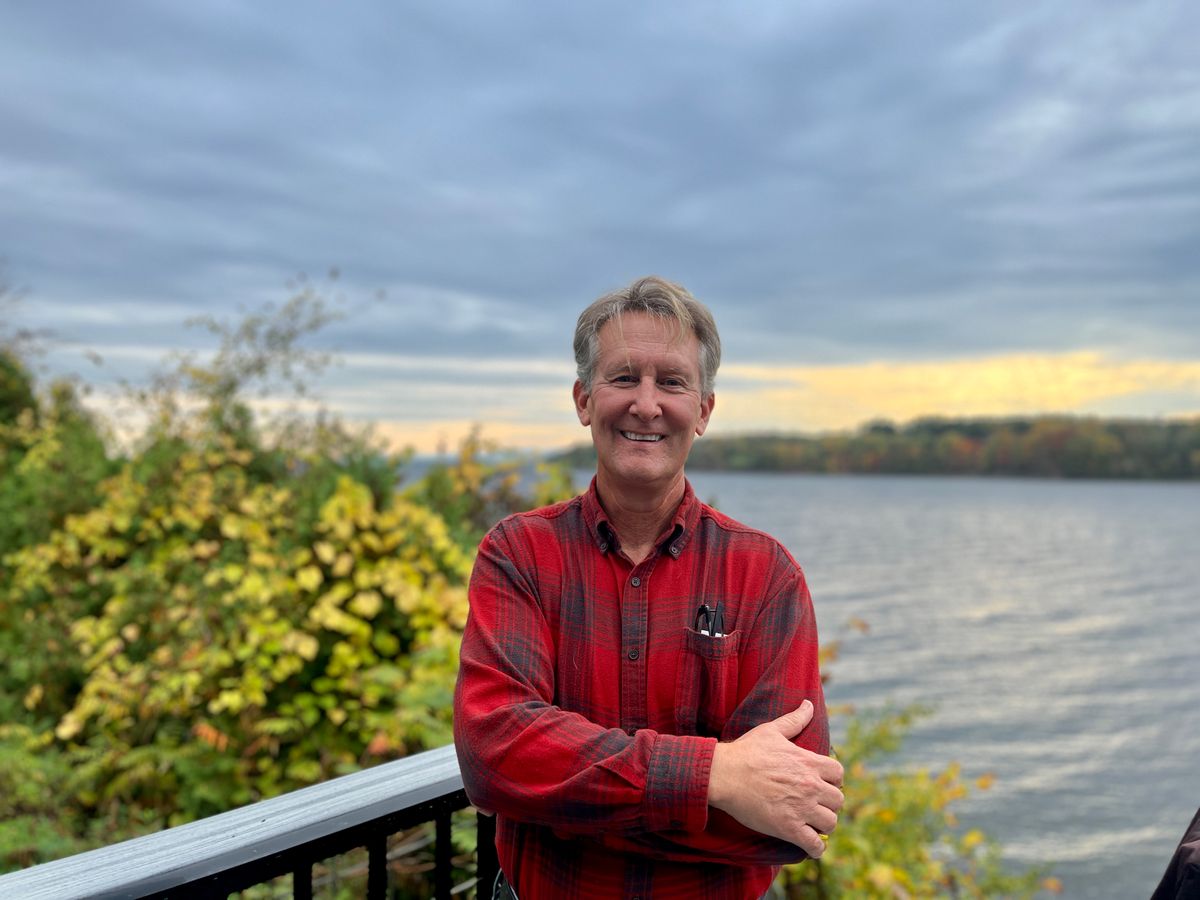 Most every writer who's ever put pen to paper has had the same dream at some point: walking into work and giving notice. They're going to write full time, supporting their existence on the weight of their imagination.

It's not an easy goal to achieve. Aspiring writers face plenty of obstacles: Will their book make it to shelves or into an online store? Will supply chain issues push back the release date? Even if they make it through that gauntlet, will audiences like what they've written?

This piece was originally published with Seven Days in December 2021 as part of its Winter Reading Issue. His latest installment (#14) in his long-running Expeditionary Force series, Match Game, is out on June 7th.

Since 2016, Craig Alanson (the pen name for Craig Odell) has carved out a comfortable living as a self-published author. This month, his Expeditionary Force, a military science fiction adventure series, hit its 13th installment, Fallout. His success as an author is notable not only because he releases books at a blistering pace but also because he's on the frontier of an industry that's undergoing considerable changes in how it delivers stories to readers.

For decades, a novel's progress toward publication followed a standard path: An author toils away on a book, finishes it and submits it to literary agents. If an agent likes it, they take on the author as a client and submit the book to publishers on their behalf. If a publisher likes it, they make an offer and begin editing. From beginning to end, the process can take years.

New alternatives emerged with the rise of online publishing, thanks in no small part to Amazon's Kindle ebook reader and Kindle Direct Publishing (KDP). Launched in 2007, the platform allows authors to upload their manuscripts to Amazon and sell them in its storefront, keeping a sizable royalty. Many competing online bookstores have followed the same model.

Such platforms gave rise to a new literary ecosystem in which Alanson and others have found enormous success. Writers who have, for whatever reason, struck out with traditional publishers can now easily and cheaply put their work before an audience.

Alanson, 59, has an origin story that begins like that of many science fiction authors. Growing up in Springfield, Mass., he read and watched classics such as Dune, The Lord of the Rings and Star Trek, and he met Isaac Asimov when the legendary author spoke at a local school.

From there, Alanson embarked on a decidedly atypical career trajectory for a future writer. Right out of high school, he was hired by Connecticut-based aerospace firm United Technologies to work on a new "mechanical inspection computer that could measure components for aircraft." Speaking to this reporter from his house in South Hero, Alanson explained that the company had no employees eager to work on the newfangled system. As the only student in his graduating class to have taken the right courses — metal shop, drafting, computer science, algebra and calculus — he interviewed with the company and ended up getting the job — once he'd turned 18.

At United Technologies, Alanson worked on components for space suits that would later fly on the space shuttles. He went on to work on rockets and missiles at another factory in Gainesville, Va., then drifted into finance and budgeting, eventually landing at Hewlett-Packard.

But the science fiction bug never left him. "I always wanted to be a writer," Alanson said, and in 2005, the urge reared its head. On vacation in the Caribbean, he tore into a book he'd picked up at the airport. "It was horrible," Alanson recalled. "I thought, This book has to get better, and it actually got worse."

That book convinced Alanson that "if that can get published, I can get published." From 2006 to 2015, he used his spare time to write three novels: a military science fiction novel called Columbus Day, a YA adventure called Aces and an epic fantasy called Ascendant.

Writing them was the easy part. But agents and publishers weren't interested in the long manuscripts, so "I could not get them published," Alanson recalled.

Eventually, his wife, Irene Odell, suggested that he look into KDP. "Part of the reason for saying that was to support me," Alanson said, "and part of it was, If you do that, you'll shut up and stop talking about it."

He was surprised: Of all three books, he'd expected Ascendant to do the best. Epic fantasy was in, with "Game of Thrones" going strong on HBO. By contrast, Columbus Day is a humor-infused military story set in the aftermath of an alien invasion, following a group of soldiers who sign up with the aliens who saved humanity from its aggressors.

Alanson had already begun work on a sequel to Ascendant, but he ended up putting it aside to continue the story he'd begun in Columbus Day. He released the second and third books of that series, SpecOps and Paradise, in June and October 2016, respectively. (Transcendent, his sequel to Ascendant, saw release later that year.)

Alanson was writing at a furious pace. That summer, he and Irene discussed shifting careers. She had just retired, and, based on the trajectory of his writing income, Alanson was able to leave his job at HP and write full time.

Digital publication has changed the ways in which people read. While Alanson sells plenty of ebooks and print-on-demand copies, sales of audiobooks have become a major chunk of his revenue in the past couple of years, he said, as the medium's popularity has grown by double digits. Many of his fans are long-haul truckers seeking entertainment for their hours on the road.

If the KDP model has opened up new opportunities for writers, it has also changed how they tell their stories. In his recent book Everything and Less: The Novel in the Age of Amazon, Mark McGurl observes that, in this online environment, "authors should consider themselves a kind of entrepreneur and service provider."

That attitude is readily apparent in how Alanson and his peers approach their writing. As sales of his first two books steadily grew, he said, he and Irene wrote a five-year business plan that outlined what he'd write and publish down to the weekly word count. He opted to keep his books exclusively on Amazon to take advantage of the Kindle Unlimited subscription program, even though that means most brick-and-mortar indie bookstores will pass on selling them. Such stores "understandably do not want to do business with an 'Amazon author,'" he explained.

"In the indie publishing cadence, you publish three to four books a year," Alanson said. Authors must continually produce content to keep their audiences from moving on.

Alanson said he received a key piece of advice from Craig Martell, an author who runs a Facebook group called 20 Books to 50k. Martell sees writing a blockbuster novel as a rare feat that isn't critical to an author's success. By contrast, a steadily selling back catalog will generate a reliable income: 20 books, each earning about $7 a day, bring in around $50,000 annually. The trick is to build up that back catalog.

That's a sentiment echoed by local indie authors Nick Crawford and Christine Mancuso, who write romance and paranormal fiction jointly as C.N. Crawford. Christine explained that genre fiction — romance, sci-fi, horror, crime, etc. — is a cornerstone of the self-publishing world, in part because it lends itself to series featuring a central group of characters that readers can follow from book to book. The Crawfords have written dozens of books in long arcs of three to four books per series.

To publish three books a year, Alanson writes at a grueling pace. In the trade publishing industry, a manuscript might take months to be edited and printed, but indie publishers have no such constraints.

"I put my time and effort into the story, not the prose," Alanson explained. "I will get 180,000 words done, edited and ready to go in four months. Now, that means that I'll basically publish by [the] second — or, in some cases, my first — draft, but I don't do a lot of rewrites, especially for dialogue."

Once he's done with a book, Alanson sends it to a fan whom he hired to oversee a group of beta readers, who in turn read the book and make notes. The group leader addresses the obvious errors in the copy or continuity before sending him the more serious questions or comments to handle. After that, he puts the book into production, sends the draft off to his longtime audiobook narrator, R.C. Bray, and begins the process again.

That process might make critics and fellow authors cringe, but Alanson believes that his early attempts to second-guess his writing simply made his books worse. He opted to plow forward. His readers don't seem to mind: Since the New York Times launched a separate audio fiction best-seller list, his books have consistently landed on it, one hitting as high as second place.

Since the rise of online bookselling and ebooks, we've heard no shortage of cries of alarm over the inevitable decline of books. In fact, book sales have hung in there, even as the fortunes of major booksellers such as Borders (now defunct) and Barnes & Noble have waned. Digital reading and listening have shown authors such as Alanson that they can not only bring their stories to audiences but also thrive in doing so. It just takes a lot of work, planning and time behind a keyboard.

Alanson has put in plenty of that. 2022 will see the last installment of Expeditionary Force come out in December, but just before he brings that series to a close, he'll release the first installment in a new urban fantasy series. "It's a bit of a risk," he admitted, to jump into a new genre. But, because "My brand is my writing style," he hopes his readers will be ready and willing to follow him into his next new world.

If you enjoyed reading this, here are a couple of other long reads that you might enjoy:

If you enjoyed all that, please consider signing up as a member or sharing this newsletter with your followers: Transfer Orbit is a regular newsletter about science fiction and its intersections with the real world, and I've got more to come this summer.