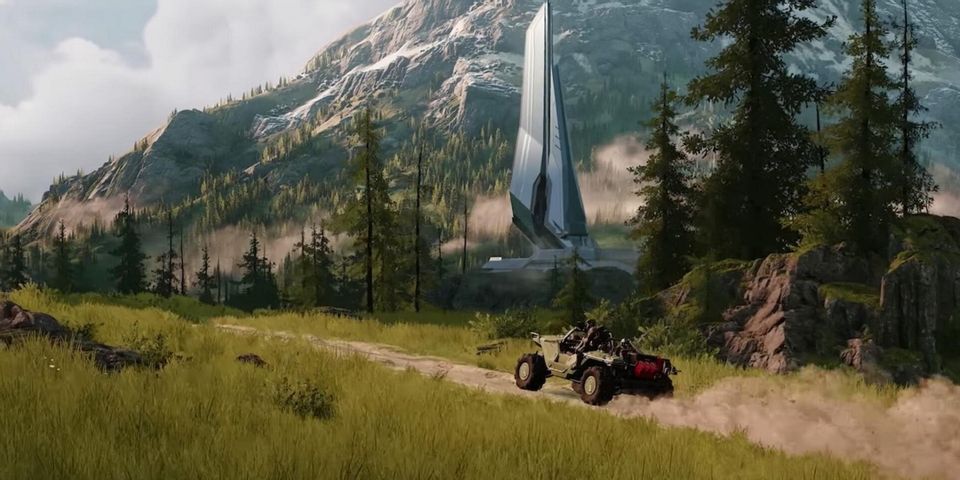 There's a moment in Bungie's Halo that never ceases to amaze me. You're playing as Master Chief, a 7-foot-tall super soldier clad in green power armor, and you've just escaped from a starship that's come under attack from a group of aliens known as The Covenant. The ship came out of hyperspace over a massive, ancient ring-shaped artifact, and with nowhere else to go, the ship and its surviving forces have landed on the ring, looking to regroup, push back against their attackers, and somehow, make it home in one piece.

That moment is the one where you exit your grounded escape pod, and you get a first look at your surroundings. There's an bridge to your left, and arching far above you is the other side of the ringworld. As you make your way over the hillside, you regroup with a small band of fellow UNCS survivors who've holed up in an elegant alien structure, and you set off in a vehicle to go and track down some others who've found their way down.

It's a fantastic opening moment: with every soldier you collect, your chances of getting off the ring seems to grow a little brighter. Ultimately, that's not really the case: along with your fellow soldiers, you not only fight against the Covenant who're looking to destroy your forces, but an ancient alien parasite known as The Flood that has been trapped on the ring, which is — as you soon learn — not only a repository, but a superweapon that'll destroy all life in the galaxy to prevent the Flood from escaping. By the time the game wraps up, you're the final-ish survivor, the ashes of the destroyed ring floating along behind you as you jet away.

Halo struck a chord with gamers. It's an accessible shooter with a massive world and story that sucks you in, and it's become the foundation of a much larger multimedia frachise that not only includes the games, but a series of novels, comic books, webisodes, and soon, a proper, live-action spinoff TV series.

A lot of those items have been fun explorations into the world, examining the purpose behind the Spartans, the history of the galaxy, the UNSC, and the continuing war against the Covenant. But while we've visited other Halo rings in Halos 2 and 3, and a micro-Dyson sphere called Requium in Halo 4, we haven't gotten to really explore the worlds that these games take place in.

Until now. The latest game in the franchise is Halo: Infinite, and it's nominally the end of the Reclaimer trilogy of games, while at the same time serving as the next step forward for the franchise as a whole. It's also unique in that unlike the rest of the linear games, it's set up largely as an open world, allowing you to explore a small section of the Gamma Halo ring, and to take on each new challenge in whatever order you wish.

The history of gaming is littered with plenty of big, open-world games, games that allow you to move freely throughout an environment, encountering challenges in whatever order you wish, rather than a series of challenges that you have to complete in a set order. The idea of total freedom of movement is an enticing one, but something that presents plenty of technical challenges. If anything, a developer's limited resources will provide you with a wall that you'll end up against eventually (although even that's starting to fall away with procedurally-generated worlds like No Man's Sky).

I've fallen in love with these sorts of games in the last couple of years. Playing Nintendo's Legend of Zelda: Breath of the Wild was a revelation in my hands: an entire, living, breathing world to not only seek out new encounters and battles, but one in which you could look for food, treasure, weapons, and resources, all of which helped you advance in the game. Picking up Skyrim scratched the same itch.

The original Halo hinted at that type of design, and presented an intriguing nugget of unrealized potential. When Larry Niven first came up with the idea of a Ringworld in his book Ringworld, his lead character Louis Wu points out that the interior of the ring's surface would contain "six hundred trillion square miles of surface area is three million times the surface area of the Earth. It’d be like having three million worlds all mapped flat and joined edge to edge.”

That's a lot of space. Halo's ringworlds are much smaller, but even still, you're reminded of the sheer size and scale of the place whenever you're outside: the other side of the ring stretches up over you, a beautiful band of blue and green and white against the blackness of space. Some levels are massive set-pieces that allow you to run around on the surface (and under it), but you've always been stuck in in the structure of the level, going from one point to another. With Halo: Infinite, you've crash-landed onto another Halo ring, and this time, you get to actually explore.

And what a joy it is!

One of the nifty tools that you've got access to this time around is a grapple shot, an arm-mounted, retractable line that allows you to scale walls and cliffs. When you're dumped onto the surface of this broken Halo ring, you wander through the wilderness from point to point, freeing up forward operating bases, isolated squads of UNSC marines, and high-value Covenant targets, all while you steadily work your way through a series of larger objectives that make up the game.

In doing so, you get a sense that what was maybe distantly imagined years ago in the first Halo game is now largely realized: you can explore the vast terrain of this one tiny segment of the ringworld, clambering over rocks and hillsides, through trees and bushes, and along improvised roads with a truck full of Marines backing you up as you take on the next objective in your path. (It's especially fun if you equip them all with lasers: everything in your path is just erased from existence.)

The game drops you in the midst of the story: following the events of Halo 5, the UNSC fought against a group of aliens known as the Banished (pretty much the same as the Covenant, just with more of a marauder mentality), and gets soundly beaten. Master Chief is dumped out into space, and six months later, he's picked up and revived by a surviving pilot. By the time you get down onto the ground, it's clear that there's been quite a battle already being fought on the surface of the ring: UNCS FOBs are in the hands of the Banished, wreckage from the space battle litters the surface of the ring, and roads where soldiers have moved back and forth criss-cross the forests and otherwise-wild spaces that exist in the ring's inhabitable zone. It's a rich, interesting environment that invites exploration, and I've spent plenty of hours just running up and down mountain peaks just to get a glimpse of the world around my character.

It's an environment that is really well-suited for the franchise, one that I suspect draws in no small amount of influence from the warfare that we've been engaged with in the last twenty years in Afghanistan, where soldiers have fought for and held small bases in the remote countryside. The soldiers and Marines that I've spoken with about the country have said that they hated it, but loved the country of Afghanistan. (I'm also pleased to see that more real-world military influences have bled into the world of the game, further reinforcing my arguments in my piece for Polygon late last year.)

It's an environment that'll undoubtably help position the entire Halo franchise for the future, and that's what I find most exciting about this particular game: there's so much potential. A Halo ring is massive, and there'll be no shortage of space for 343 Industries to tell new stories on it: all they'll need to do is issue a downloadable patch with new levels and missions, unlock a new segment of the ring, and unleash players into the next phase of the game. As I've explored in the days since I've finished the game, I've stumbled upon random locations that don't seem to go anywhere, but which seem to hint at a deeper history of the ring and its creators, as well as doors to new places that might very well get unlocked with some update in the months and years ahead.

I hope that's the case. Unlike Breath of the Wild, I'm beginning to find that Halo: Infinite is starting to lose some of its appeal as I finish out the last couple of enemy strongholds and trek through yet another pine-forested rocky hillside. BOTW had plenty of environments to explore and nooks and crannies to collect stuff from. There's still plenty of potential promised in that department in the original Halo: wintery, ice-covered levels, swamps, ancient chambers and structures to dig into and explore. A Halo ring can contain all of that and more, and I hope that 343 will continue to build up what they've laid down with this game.

The ultimate appeal of an open-world game set on a giant ring is thte possibility of getting to walk its entire interior. I don't actually know or really think that 343 will do that: it's a massive amount of land to program and populate, but it's certainly a neat thought and a solid direction to head in. That, I think, is one of the ultimate appeals of science fiction as a genre: a vast world to explore. I can't wait to see what comes next.